To prevent His devotees from straying away from religion and to keep everyone devoted to Him, Lord Swaminarayan thought of two things. Firstly, to build temples and install idols of Lord Shree Krishna and Himself as Lord Shree HariKrishna Maharaj. Secondly, to write scriptures to reveal the greatness of the Swaminarayan Sampraday.

A man however great or intelligent cannot meditate calmly in the home. The reason is simple, there are many material objects and thoughts in the home that will distract one’s devotion. There is a traditional saying that performing one mala at the temple will give the same fruits as doing one hundred malas at home. This illustrates how important temples are in our sampraday.

Lord Himself installed the murtis at the temples that He constructed. After His departure to Akshardham, as Lord had stated that Acharyas should install murtis of God with Vedic mantras and ceremonies.
People achieve great inspiration and pleasure whilst worshipping God with great saints and other devotees in the temple. For these reasons temples are a necessity in the life of a satsangi. Lord Swaminarayan had six temples constructed in His divine presence.

These temples were constructed at : 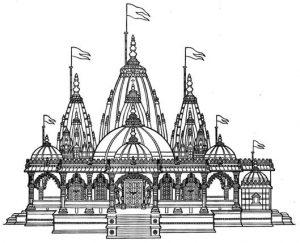 Ahmedabad was the first temple to be constructed. An English collector gave the land during the British Raj. The deed document was transcribed on to a copper plate, stating that the land would remain under ownership of the Swaminarayan Sampraday for all time. Anandanand Swami designed the structure of the temple. Lord Swaminarayan Himself installed the images of Lord NarNarayan Dev in VS 1878 on the 3rd day of the bright half of the month of Falgun (Monday 24th February 1822 AD). 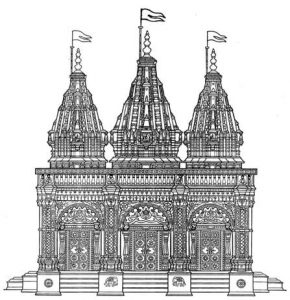 The devotees living in Bhuj including Gangaram Mull, Sundarji Suthar and Hirji Suthar requested Lord to construct a temple at Bhuj. Lord instructed Vaishnavanand Swami to construct the temple and again Lord himself installed the murti of Lord NarNarayan Dev in Bhuj on VS 1879 on the 5th day of the bright half of the month of Vaishakh (Friday 15th May 1823 AD). 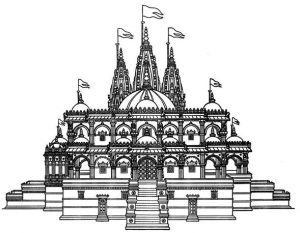 Punjaji Darbar of Dholera urged Lord to construct a temple in Dholera. Nishkulanand Swami and Adbhutanand Swami constructed the temple. Lord Swaminarayan installed Shree MadanMohan Dev and Radhikaji in VS 1882 on the 13th day of the dark half of the month of Vaishakh (Saturday 19th May 1826 AD).

Lord Swaminarayan stayed in Gadhada for 25 years. He made Gadhada the centre of the sampraday whilst He was on earth. It was the deep love and affection of Dadakhachar and his four sisters Jaya (Jivuba), Lalita (Laduba), Panchali and Nanu (Ramabai) that attracted Lord to spend most of His life in Gadhada. He stayed at the royal residence of Dadakhachar treating it as His personal home. By the request of Dadakhachar and his sisters, Lord constructed a grand temple under His personal supervision and with the assistance of Viraktanand Swami. At Gadhada temple Lord installed Shree Gopinathji and Radhikaji. The murtis were installed in VS 1885 on the 12th day of the bright half of the month of Ashwin (Saturday 9th October 1828 AD). 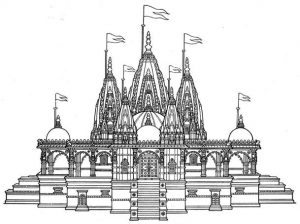 Lord constructed a huge temple at Junagadh on land presented by Jinabhai (Hematsinh) Darbar of Panchala. Brahmanand Swami constructed the temple and Lord installed Shree RadhaRaman Dev in VS 1884 on the 2nd day of the bright half of the month of Vaishakh (Friday 1st May 1828 AD). 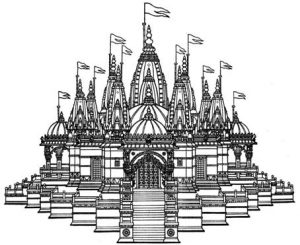 Devotees of Vadtal including Joban Pagi, Kuberbhai Patel and Ranchodbhai Patel requested Lord to build a huge temple at Vadtal. Brahmanand Swami and Aksharanand Swami designed the Vadtal temple. Lord Swaminarayan Himself helped in the construction of the Vadtal temple by carrying stones to the site.
At Vadtal, Lord installed Shree LaxmiNarayan Dev, Shree Ranchodrai Dev and Shree HariKrishna Maharaj (image of Himself) with Shree RadhaKrishna Dev. Lord installed these images in Vadtal in VS 1881 on the 12th day of the bright half of the month of Kartik (Thursday 3rd November 1823 AD).